The Knights of Thorn VI

So, keeping up with the tempo I set for myself to finish this post before last Saturday (which I almost made.. just forgot to post it :)), my report for the knights of Thorn. Because the long matches I sometimes played, I did not take as much pictures as I normally do. I'll compensate with a decklist, something I normally don't really do because I like to keep with the spirit of home brewing. Although I admit, sometimes when I have no inspiration at all, I like to scroll through decklists to get some inspiration and too just look at old cardboard, so I like to stare at decklists every now and then. I also did not take notes of all my games somehow, but I have some memory of how everything went. If I miss something my opponents said or did, sorry guys!

For the knighs of Thorn, there is a different restriction than other tournaments in that 10 reprints with same art and same border are allowed. This leaves for a little more room for Peter and me to build 2 decks that are to our liking without having to worry about rares we don't have. This mainly goes for dual lands by the way. We built a skies deck for Peter with Serra Angels and Ghost Ships, and since I promised Timmy the Sorcerer from the Timmy Talks youtube channel to play a deck with Timmy (prodigal sorcerer, for those that don't know :)) this year, I started off with 4 prodigal sorcerers. And then you start thinking, what can I do with those? I mean, they're not aweful, but they're exactly top tier either. I played with the idea in my mind for a while and started off with thoughts about colors. I ended up with green being the best option, because I could play living plane with Tim, and sylvan library with Sindbad, a creature I also love a lot. After a couple games and some card shifting, I ended up with this. 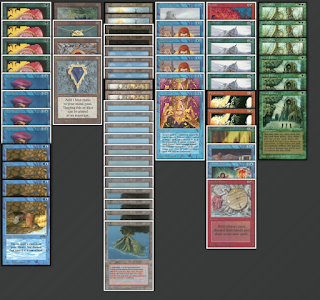 Obviously not a top tier deck. But good enough for me to want to give it a try, and since winning was not the object here, I went for it. And then changed some things in my head as we were driving to the tournament. 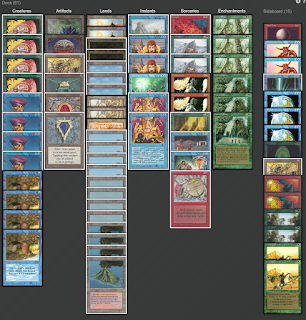 I figured meekstone would be good with only 1/1 creatures and I did not want to miss out on Chaos Orb and Strip mine. I might have changed one or two more cards, bit since I did not take a deck picture before stripping the deck I'm not entirely sure this was the final list, but close enough for this report I think. There was absolutely no way I was going to get into the Top 8 with this deck, so I had prepared a deck for the interesting no-core-set side event in which I would be entering after (probably) losing all my matches.

Unfortunately, in round one I was paired against Marten, who's not only an excellent player, but also one of the few people I had shown my deck to before the tournament, so there would be no element of surprise in this match.

And apart from playing as good as he is, Marten then proceeded to play some pretty obscene plays right from the start.


In game 2, after having lost game one, I thought I would have a pretty good opening seeing my hand. Then this happened: 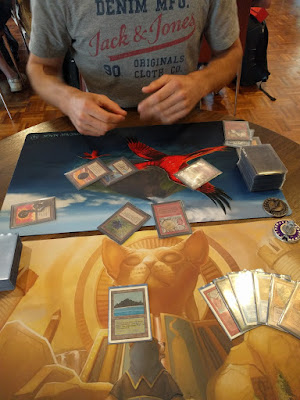 Yes, he dropped a land, 2 moxen, a sol ring and then played wheel of fortune on turn one. Well, that's not good when you want to take a mana advantage :)

He then proceeded to play Sol'kanar the swamp king and started swinging. When I tried to stop the onslaught with the control magic I had sideboarded in, Marten played balance (which is kinda of a killer because of his mana advantage with the moxen), then Su-Chi and the beatings continued. He finished it off with a recall on his timewalk and his fireball (he had played the Time Walk before the balance) and finished me of with a forked pyrotechnics.

Well, that wasn't a good start...  I was expecting to lose, but this was a massacre :)

In round 2, I was paired against Anies, who played Erhnam/geddon. And Djinns there were plenty. He played a quick Djinn, which I killed with pyrotechnics and Timmy after being attacked once. The turn after the first Djinn was killed, he played another. I fireballed it and pinged with Timmy to kill it. And then the turn after that, you guessed it: another Djinn.. By then I was out of firepower and he just ran over me before you know it I was down two matches.

In round 3, I think I played Edo, but I didn't note a name with the game. He was also not playing his best deck, because he had borrowed that to one of the other players. That did not mean there was no punch though: 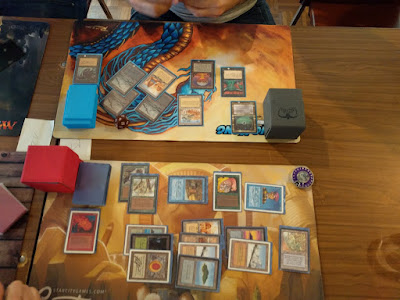 Fortunately for me, my deck was running as it was supposed to: 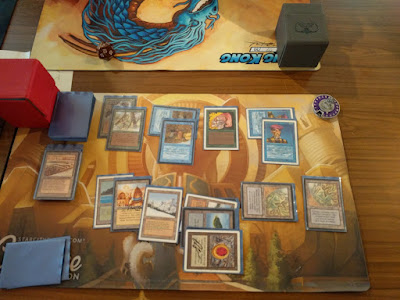 Drawing cards with Sindbad is nice by itself and amazing with Sylvan library. And I was able to win the match by attacking someone with a maze of ith :) Doing damage with a maze of ith is strangely satisfying. At least I could say I won one match that day :)

Round 4 I played Hero, also a Oldschool/Ancient veteran who was playing some cards he had not played before, Gauntlets of Might.  Game 1 I was able to win because my deck did what it was meant to do: 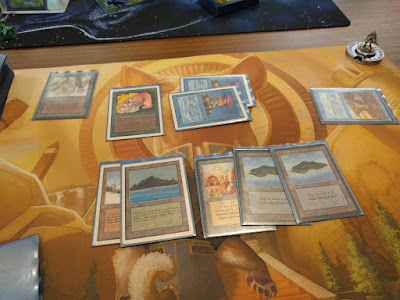 In this game, I just used Sindbad to gain some card advantage by drawing a couple of lands. Still pretty good, even without the Sylvan Libary.

Game 2 and 3 were a different matter though. Even though I played some basic land and moxen, I was not able to get them fast enough to get over this: 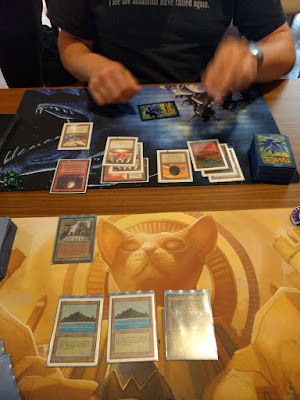 He basically just burned me to death with lots of mana from his mountains which all produced RR instead of R, in game 3 there was not much difference: he played blood moon, a couple of mana vaults, then first fireballed me for 7, and then disintegrated me for 13. He even had an earthquake just in case all of that wasn't enough :) 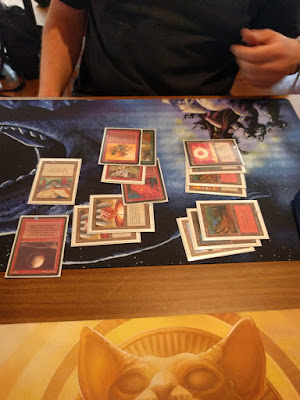 In Round 5, I played Thilo who was playing a twiddle/vault/stasis mix. In game 1 I played an early 1/1 (I no longer remember it that was either an Elf or a Sindbad, after a while you get less focused :)) and he played a Tabernacle at Pendrell Vale. I thought about it a bit, and decided to just go for it and played Living Plane. I figured there wasn't much of a problem stalling my opponent while I was waiting for the right cards to show up. He proceeded on his turn, passed the upkeep, and drew a card. When I pointed out to him that all his lands would be dead, he flinched. He asked me about the upkeep and I explained about the effect of the Tabernacle and the living plane together, and asked him if he wanted to turn back and pay the upkeep. He thought about it for a while and then conceded. I hadn't figured out what he was playing by then, but it makes sense. You're not going to do anything useful with your extra turns or keep up your stasis in play if all your lands have an upkeep.

Game 2 was more exiting and he kind of surprised me with his stasis because I thought he was just playing twiddle/vault. I just kept playing, waiting for the right moment and the right cards. Waiting does not really hurt the deck I was playing. When the time was right, before my turn, I played Red Elemental blast, backed up with a counterspell. He countered back twice, but was then left without any untapped lands. So I drew a card, passed the turn and waited for the stasis to go away. I then played Energy Flux to keep his howling mine and time vault busy, and waited for a couple of extra lands to show up. I powersinked something and then played Living Plane and Pyrotechnics in one turn. That was what it was supposed to do and enough to win the match.

So, a 2-3 at the end of the swiss. Not bad for something that is basically a fun deck :) And then it was on to the side event while the top players were going for Top 8.  I will write a separate post about the side event as soon as I find the time. Like always in oldschool, there was lots of nice guys (are there no ladies playing oldschool? I remember seeing a lady participant in an Ancient Tournament I organized, but I think that was the last one I met..), lots of good games. Oldschool is amazing. May it live forever :) Thank to Mari for organizing this event and thanks to all who showed up to play. Till next time!