On november 4th we held the 4th edition of the Draconian Cylix Series, Oldschool magic using the French set of rules. It's always a bit of a surprise how many people show up, but we had a nice group of players, enough for four rounds of swiss, followed by a top 4.

In the last tournament I was in (Frost Giant Cup) several people were playing a Land's edge deck inspired by Randy's deck, and since this deck is different from previous Lands Edge decks I've played (mainly because there is only one kill, a single Land's edge, something I've never tried, minimum I always stuck to so far was two) I decided to give it a try because I wanted to know how it plays. I was also looking forward to using the rainbow vale gimmick and see if that would work (spoiler alert: it didn't, because I either ended up getting them back or them not having a positive impact at all). I tried the deck a couple of times against Peter and it seemed consistent enough even without any counters of it's own. Because it was late and I couldn't decided which cards to cut for power sink, I played the deck without. In retrospect, I think the deck would have performed better with power sinks, but I'm getting ahead of myself here.

On the day of the tournament, Arno ran into the fact that the trains weren't going as normal due to maintenance and he had to travel longer. Fortunately, he did get there just in time though. While we were entering player names in our pairing system, one of the players sent us an e-mail telling us he was coming, but would be a little late. Since this is a format that is only about the atmosphere and the cards, we waited and were happy to see he came with a friend, which meant we would be playing an even number of players.

I was first paired against Carl from Belgium. He was playing Cermak-like deck with Serendib Efreets, savannah lions, orders, bolts, counters and power. This is the deck I sometimes think is the most powerful deck in the format, and I know Carl is a good player since I've played him before and know he's very precise and thinks his moves through very well. This would be a tough match, and it was. He opened the first two games with a Library of Alexandria. During the game I noticed several times that rainbow vale would not really do much and chose to play other lands. This was somewhat of a theme during the day, later on I would also regret having them instead of city of brass. The first game was mine after a ivory tower stuck and I ended up drawing extra cards from a Sylvan Library. The second game was Carls after I messed up with my sideboard, I should have added an extra moat in retrospect, because the one abyss and one moat weren't enough, even backed up with the wrath of god from my sideboard. It would be up to the third game, but we ended up 1-1 when time was up and neither of us could finish it within the 5 remaining turns. 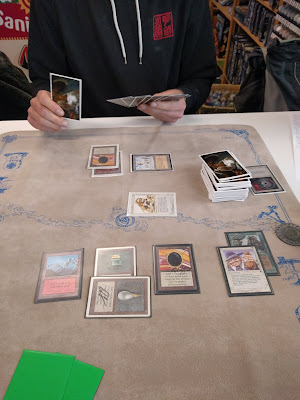 Second round I was paired against Hero. He's a long time player of both Oldschool and the Ancient format and according to me, has the right way of looking at this format. He plays it only for fun, and pretty much a different deck every time. That doesn't mean this is going to be easy though, he's a good player. The first game started off with some creatures, some burn and then channel/fireball pretty quickly. I don't known on which turn, but it was somewhere around turn 5 or 6 I think. So the first game was over in less than 5 minutes and had me remembering I had no power sinks. The second game took a while longer. I got my deck running with land tax and ivory towers and ended up with a life total over 50, even after a shatterstorm and a tranquility. We would have to see who would win this round by playing the third game. In the third game, Hero's deck produced both black lotus and channel, combined with one of his fireballs and that was that. Just before that, he pulled off a really neat trick to both do more damage and and keep me from taxing: 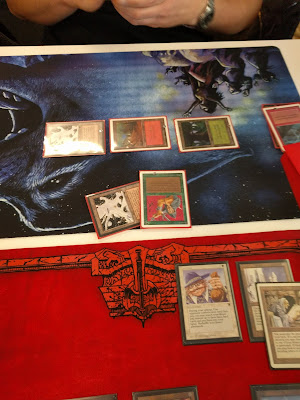 Channel fireball twice over in one match, both with black lotus. Wow. It's been quite a while since that happened to me. 1-2 result. At least it was over quite quickly, which gave me time to take some pictures: 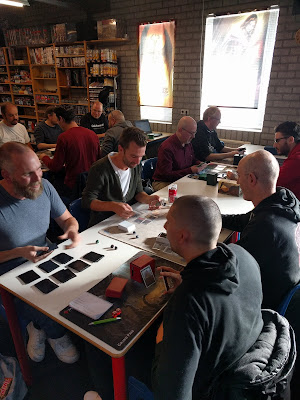 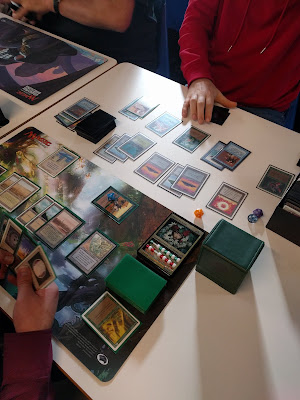 Winter orb with guardian beast. That's just unfair. Later on someone would pull a stunt on Marco that would even it out for this tournament, but that's a later match. Anyway, on to the third round.

In the third round, I was playing another land tax/edge deck, but without a lot of power so it was quite an uneven match. He was very careful to make sure I didn't tax that often and he had burn cards, so in theory he would be able to get me with bolts and a feldon's cane, but that would take a very long time. He had to play a land sooner or later while I was getting life from an ivory tower. When he started to throw some fire at me, I played armageddon and after a while we ended up with this boardstate:


In the end he had to play a land to try something, but that gave me plenty of opportunity to land tax and finish the game with lots of lands. It was quite a drawn out game which made sure we would not get to finish another game. If I play this deck again, I'm going to try some more finishers, it takes quite a long time this way. 1-0

On to the fourth round, I was paired against a zoo deck, which I should be able to win with moats, abyss and ivory towers. It was not easy though, and my opponent just kept playing creatures. One of the key moments of the match was when I played a chaos orb, and he played his while I had no mana to activate mine, and he just barely hit mine on the sleeve.

Had he missed, it would have been much more probable I would have won that game in stead of going to 1-1. Although one of the other key moments was quite nice: 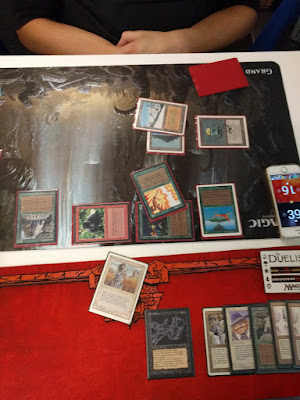 I wanted to make sure I would not get beaten too much and wanted to speed up the process already started with the abyss with a swords, but that wasn't meant to be. I when he tapped one green mana, I already knew what was going to happen and it always makes me smile when someone avoid fates :) We were in the third game when I had to call time (as the organizer you don't get to bend the rules, at least I think so) so we ended up in a draw. We played out the game and it turns out I would have won 5 turns later, but when time's up, time is up. So this one ended in 1-1 as well, which meant I would not be in the final 4. It might have happend had I won this one, but now I was definitely out.

In the meantime, someone made sure Marco was not destroying their land with a demonic hordes. A strip mine made the difference between this: 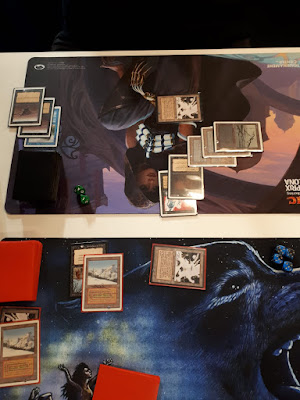 and this one turn later, which finished the game pretty quickly: 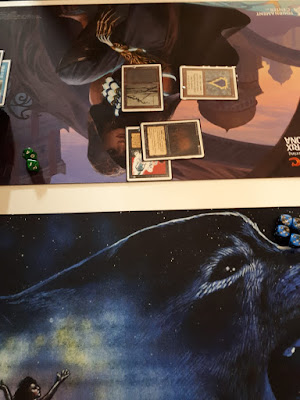 Although I like the land tax deck and the fairly obscene things it can do, I think it may need some more finishers to make sure you don't draw this often. Either that or I just did not draw the cards that well. I'll work on that and try this deck another time and see what happens.

It did give me plenty of time to watch the final 4, which had one totally unpowered deck! Always nice to see that it's possible to do well without power. In this case it was a variant on a stasis deck which also contained winter orbs.

Unfortunately he didn't make it to the finals, it would have been awesome if a unpowered deck would have won one of these tournaments. I remember it happening once (a Erhnamgeddon deck without power once won an Ancient tournament) but I would like to see it done more often. The finals were down to Carl and Marten, playing a speed deck vs Erhnamgeddon without armageddon. The match was very cool to watch, with balance swings from one to the other. 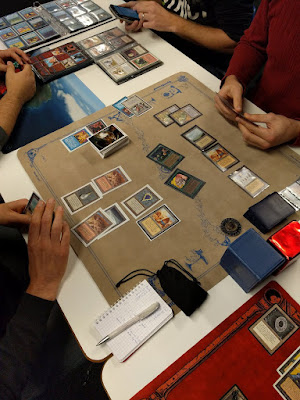 At one point, I thought Marten was going to win, but then Carl drew not one but two control magics in short order: 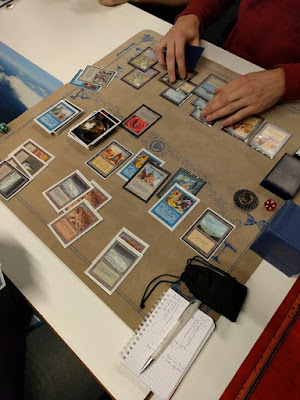 Just after this, Marten drew his diamond valley. What a difference that would have made. it was on the third game, which was off to this start: 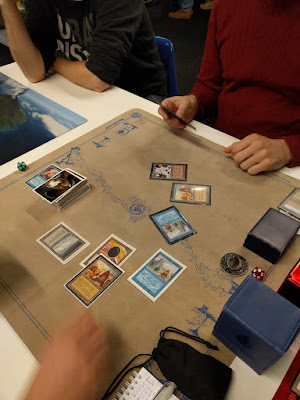 So it was close from the start, but in the end, Carl's deck was just too fast and and he won the cup, ehh, cylix, fair and square:

Congrats to the winner! As shown in his report, this is obviously a very strong deck and with a strong player like Carl behind it, it proved unstoppable this day. Well played!

As for the rest, some of the other oldschool moments of the day:


Last Sunday was a big day for the Old school community with the Old school tournament at Eternal Weekend, but there also was a Dutch tournament: Draconian Cylix IV. Having enjoyed the previous installment, I brought Antoine with me this time. After an uneventful ride from Brussels (Belgium) to Eindhoven, we registered the same 75 cards: Temple of Sped, with a modified sideboard:

One of our players sent me a nice tournament report of the last Draconian Cylix of the year, here it is! Cheers, Bjorn