After our sidestep with 93/94, it was time for a normal ancient constructed event, which we played a couple of weeks ago. As always, I play a different deck every time and I love the inspiration on the internet now that oldschool has become more popular. I went with an Arboria/Millstone deck. This had worked somewhat during a couple of playtest rounds. It wasn´t very good, but it was better than the Enchantress I had tried a couple of months back, and anyway, I don´t play Ancient to win anyway. I just like to feel of gameplay and the people we play with.

Because we´ve been contemplating removing Mirage from the sets you can play to get back to the original idea of Ancient, Arno decided to grasp this last chance to play with his elephant graveyards. 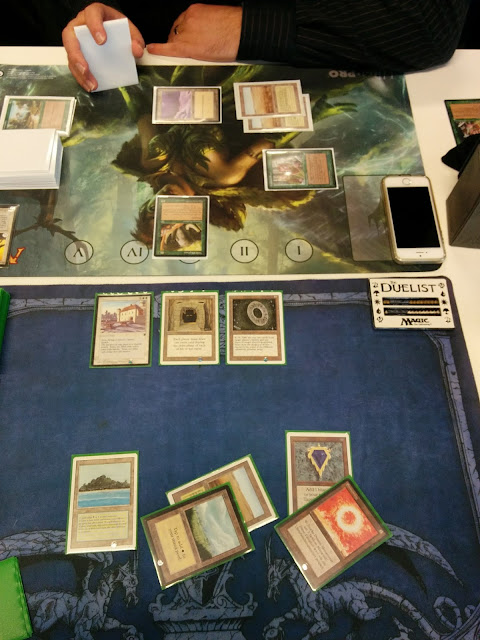 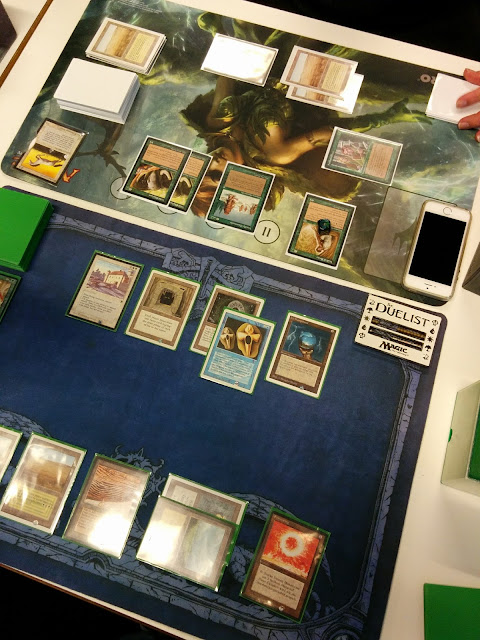 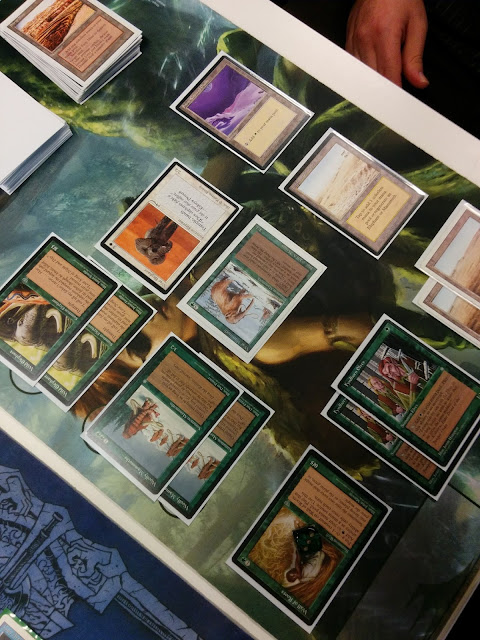 In the game above I managed to get out a moat, but most of the games that was disenchanted along with the Arboria. Or tranquility took care of them both, and that happened multiple times. Maybe I should run counterspells next time. 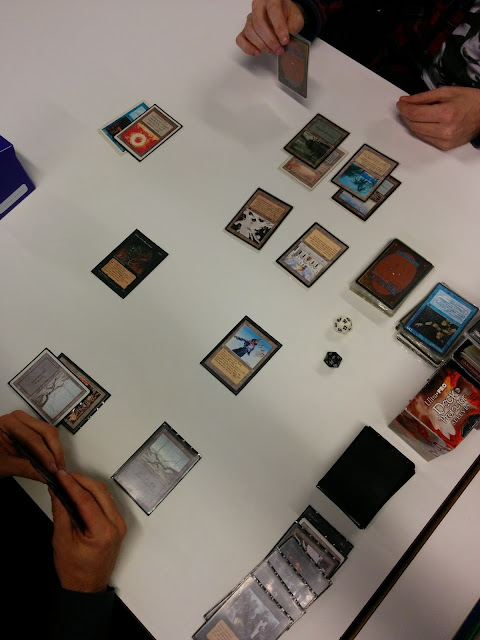 Peter played a horrible U/B deck running main deck glooms and dystopia´s with sleight of mind. And it was horrible against most of the decks played, but not against the mono black deck Roy had brought. Roy is building this deck to play other oldschool formats, and it worked very well. He ended up winning this day. 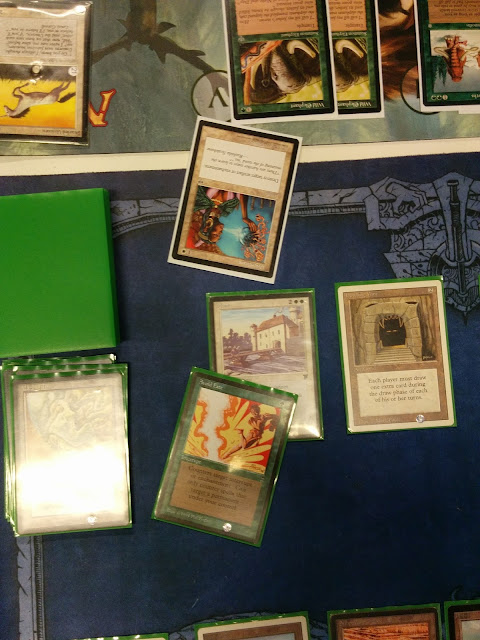 One of the times I actually managed to keep an enchantment in play against a W/G deck, which is quite hard. And there is always something really satisfying about playing an avoid fate. I lost the match anyway, but I had this nice moment :) 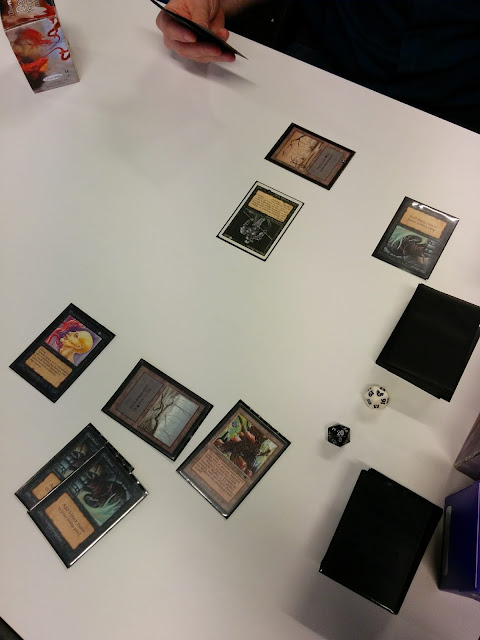 And there you thought playing dark ritual, hippy was a powerful play. And then your opponent does this :) 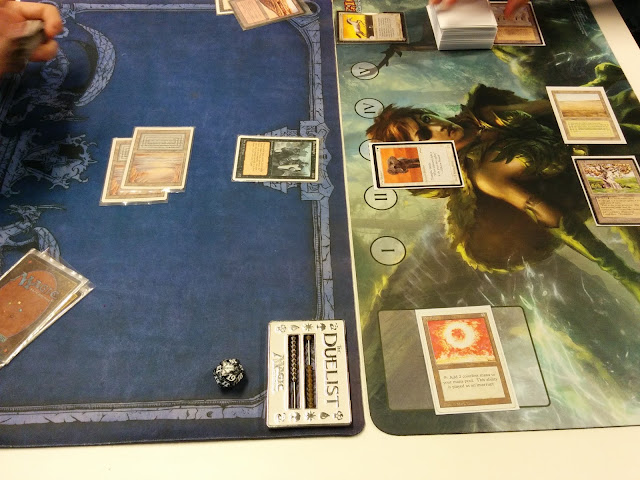 Banding was used several times, but unfortunately it did not do much against the black decks. 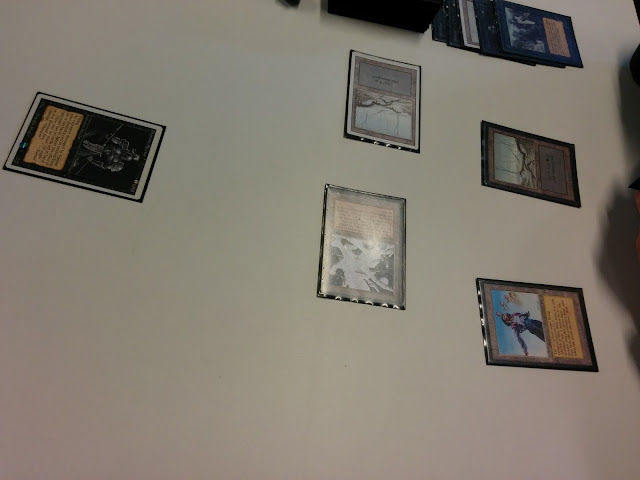 The hippies that were played this day were not very lucky. Here an island of wakwak is played immediately after the hippie. 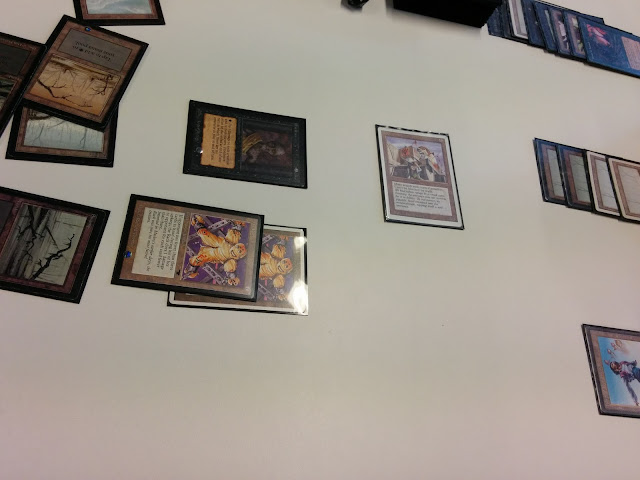 Racks! sure, why not? We just don´t see them that often. 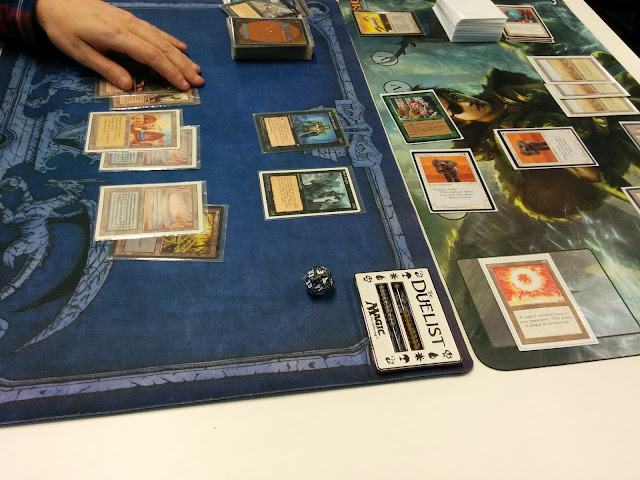 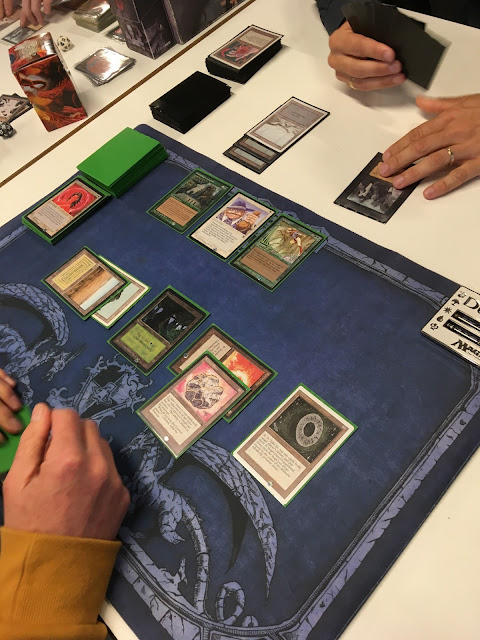 Here I actually have the combo in play as it was intended. I did wonder why I had bought 2 AQ millstones for this deck though, because the only one I kept getting was the revised one.. 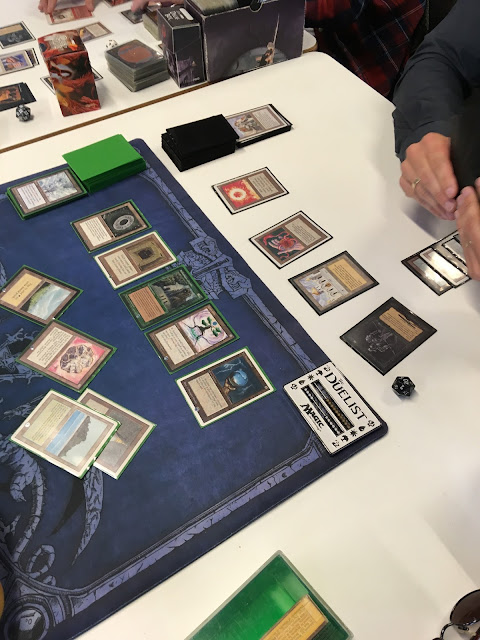 I noticed that the arboria deck is really vulnerable, because I lost every match. If it wasn´t against disenchants or tranquilities, it was against disks, glooms, dystopias or something else. Anyway, the matches were in a good atmosphere as always, and we had a lot of fun. I must admit it would have been nice to win one match, but it was not meant to be. Which I figured when I faced two glooms and a dystopia by turn 6 against Peter :) Oh well, maybe I´ll try to improve on this idea. It did not seem that bad to begin with and I like the idea.

Trying the Enchantress in Ancient

I wrote this article somewhere during the summer, but I never got around to writing the last paragraph. Now that the weather is not nice enough to go outside, I´ve finished it so here goes:

I've always been a fan of the Enchantress. Right up to this day, It's been one of my pet decks, along with a mostly black landdestruction deck that I've been playing since 1994. So when we started to play Ancient, I wanted to play an Enchantress deck as well. But I've never been able to make it work sort of effectively of with a moderate win rate. It mostly loses, but I never lost the love for it.

When I was browsing some idea's I ran into the fastbond/mirror deck some people play in 93/94 and I decided to give this a try in Ancient. Unfortunately for this deck, we use the banned and restricted list just like then, so I can't play four fastbonds in Ancient. We could of course change the list, but we want to make the gameplay feel like then, with the good and the bad on the banned and restricted list just like it was back then, so we´re keeping it mostly the same and have not changed it since 2011.

Considering the Enchantress deck does not seem to be that good in 93/94 I should have seen it coming it would be even worse in Ancient, but I decided to try it anyway.

I tried compensating for that loss with the use of enlightened tutors but that did not work out so well. I tried mostly against Peter's Ernham/Geddon deck which has been quite succesfull in Ancient. 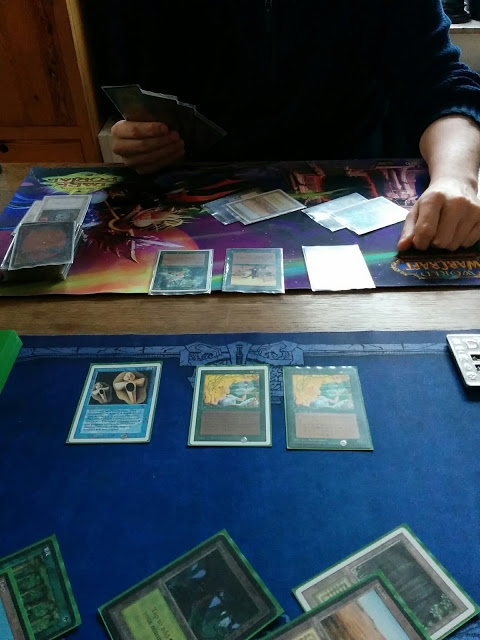 The picture above is one of the rare occasions during playing when there are actually two or more enchantresses in play. The opposing deck does run 4 swords to plowshares maindeck, and there are not that many targets in the enchantress deck I built.. 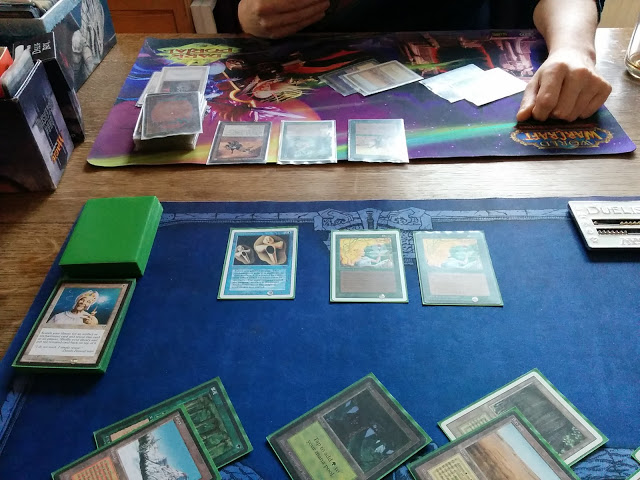 Here it does seem to work, but that was just one in many games. I ended up winning this one because somehow the deck managed to keep the enchantresses in play while not being killed by the onslaught on the other side. The winning was different than planned though. 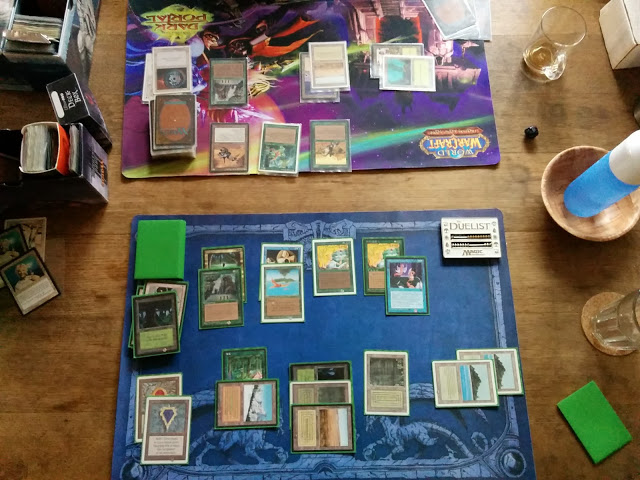 I held out for some turns with the dark heart of the wood to prevent myself from dying. That seemed to be a recurring theme during the many games we played. I usually ended up with no land and no creatures and no life. Not in this game though. But in the end, it wasn't the intended channel fireball that did Peter in, it was just a plain old fireball with lots of mana. He had disenchanted my dark heart of the wood by then, so a channel wouldn't have been much good anyway. Decks with 4 swords to plowshares and 3 disenchants are not that uncommon in Ancient, so if I decided to play it, the situation would likely repeat over and over again. 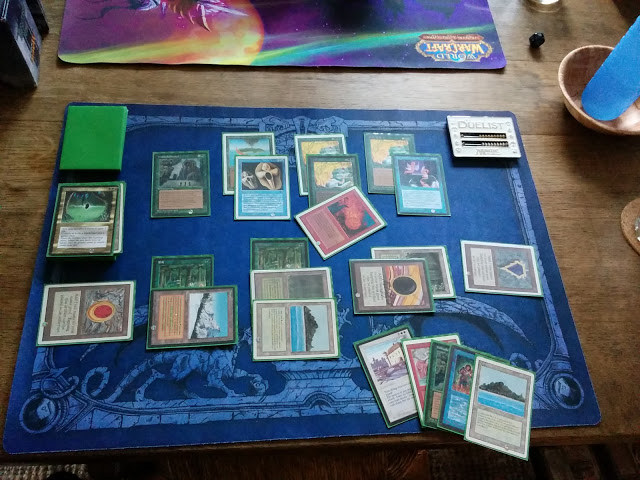 In the end, I won a few games and I still feel I really like the deck. I like playing the enchantresses just as much as I did 20 years ago. Though I never tried this build way back when, the experience was much the same as in 1994-1996. It is really cute when it does work and do it´s tricks, but it just does not work consistently without plenty of cheap enchantments. I tried different variations and numbers, but the tutors (no matter how many or how few) cannot compensate for that. I also tried playing it against a mono red deck and there it also lost most of the games, even with COP red. The COP did not protect the enchantresses from dying, and they died a lot against the many bolts and chain lightnings. 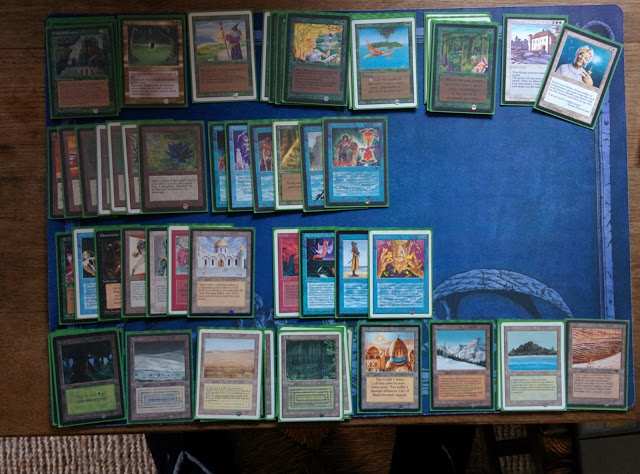 One of the builds I tried playing during the days of trying to make it work. In the end, I decided not to take one of the builds to a tournament because I don´t mind losing, as long as I have a feeling I´m not being completely and utterly slaughtered during the games. Playtesting left me with a quite bad 10% win rate, and about half of the 90% I did lose, I never had the feeling I even stood a chance. I´ll give it a go in a 93/94 somewhere. I´ll probably still lose a lot, but not as much as with this deck :)