Wow, time flies. It feels like only a short while ago but it's been months already and in about one week I'm going to play my next Oldschool event in Belgium (Gaea's Avengers). These days there are so many tournaments I hardly get to organizing one myself. There used to be years I organized Ancient or French Oldschool five or six times a year, now there are so many tournaments I can't even find the time to visit them all. Maybe the Camel Trophy will see an Ancient side-event to prevent that format from dying out. But anyway, I'm digressing. That many tournaments also means I'm sometimes just to busy to write coverage. I was kind of planning to do two events in this one post, but then it would just be too long. I kept it at the RBS and will be writing a Knights of Thorn report later.

The Raging Bull Series (RBS for short) is a full Swedish tournament, meaning you can't play any reprinted cards, just card from the original series. This means building two decks for Peter and me would be a challenge. Even though I have a nice collection and Peter has been buying some Oldschool stuff that was somewhat affordable, building two decks with cards from the original sets was not going to be easy and the decks were bound to be at least a bit suboptimal because some cards would be lacking. We don't have a full set of UL duals between us, so playing multicolor decks would present a problem while building decks.  Fortunately, we both are beyond wanting to win a tournament above all. We mainly want to play and have a good time, even though I do want to put up a fight with whatever deck I'm playing with.

After some looking through our cards, we decided on a G/U Agro berserk deck for Peter and I would build an ode to a deck I played in a Type I tournament somewhere in 1996 with Rene, another friend of mine. We both played a "creatures suck" themed deck which relied on Moat and The Abyss to prevent us from being overrun and I used Tetravus for the win. Rene used Clockwork Avian back then. After looking for an original Clockwork Avian and finding I don't actually own one, I decided Tetravus would be the better option anyway and went with that. The original deck used four mana drains to get out one of the two Tetravusses, but since Swedish rules prevent me from doing that, I cut out one Tetravus and added a coffin, which would give me some more control and an option to build lots of tetravites. I could not remember the exact decklist we played way back when, but somehow I could find no space for swords to plowshares when I put all the cards I wanted to play on the table. So in the spirit of fun and not being a Spike (this time :)), I just left them out to see what would happen. 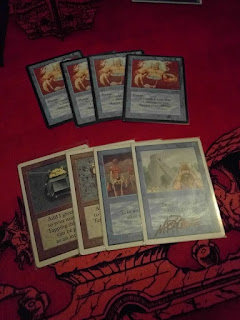 I did not want to die that easily and thought adding an Ivory Tower to this deck would work nicely. A moat and a tower also make a castle together, and I do like castles. We playtested a couple of games, and I thought the deck wasn't so bad it would lose everything outright, so we stopped thinking about how the decks could be better and just played some more games with different decks.

On the day of the tournament, you realize why Amsterdam is both great and sucks if you want to reach a place in it by car. We parked somewhere on the edge of the center and took a tram to the gaming cafe 2klaveren where the tournament was going to take place. There we met with lots of familiar faces and finished our decks with some last minute changes I thought of while driving. We then had to wait for some Italians who were fashionably late and after that we were finally ready to play some matches. Game on :)

First round I was paired against Mari, organizer and winner of the Knights of Thorn. This was going to be a tough match. I started off game one with an early ivory tower and a maze of ith while Mari was playing merfolk and serendib efreet. The decision to add some Ivory Towers to my deck was paying off in this game. 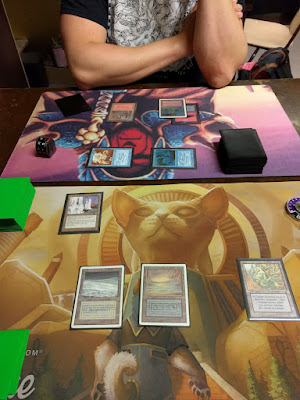 This bought me enough time to let my deck develop and after a while we were in this boardstate: 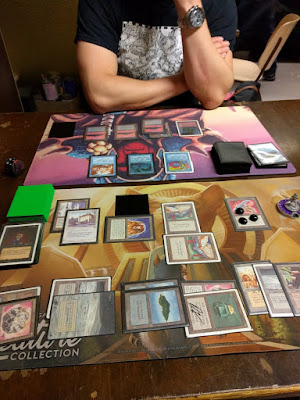 After a mind twist this was pretty much game. I still don't know how I feel about that card. On the one hand, it's goddamn awful, on the other hand, so are many other cards in the format, so might as well let them see play. In the second game I played a first turn library (which was immediately stripmined) an early Abyss, which also bought me time to win the game.

Round 2 was against Robbert-Jan, who was playing a black aggro deck with Juzam Djinns. I do love Juzam Djinn, even though I tend to lose a lot when I play with them :) I did not see that on turn one though, when he opened with a Library of Alexandria. I quickly played my disrupting scepter to prevent it from getting out of hand right away.

He decided to go for a quick win and played a Juzam Djinn for BB2. I then played my WW2 card to make sure I could sit there and wait to win: 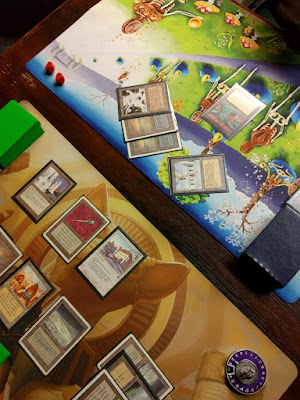 It was just one of those games where you just get the answer for the stuff your opponent plays. Since I did not play swords to plowshares, the Djinn would have been a big problem, even with the Ivory Tower. Now it just wasn't. There was no way to bypass the moat and all the while I was sitting in my Ivory Tower. On to game 2. And then cosmic balance was restored after I faced this: 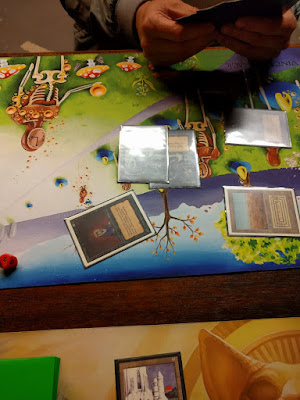 There was no coming back from that. Creatures followed and I was crushed quickly, just as a deck like that is supposed to work.

Game 3 developed more slowly and cosmic balance swung back to me. I then did some pretty obscene drawing to answer everything: I played quick Ivory tower followed by timetwister. A moat after he played a mishra's factory and then an Abyss after he played a Hypnotic Specter. I had kept both in my hand to see if I could lure him into playing stuff, but you have to draw them to play them. I was lucky I drew those things early. Eventually and we ended up in exactly the board state I remembered for this deck from way back when:

So I won this match 2-1. Feeling pretty good about this deck by now, I managed to get out what I wanted and had won a match with it. In the meantime Peter had crushed someone with a 24/3 Serendib Efreet, so his day was already a success.

On to round 3, I played Tom, who was playing a black/white control deck with underworld dreams, disenchants and Cuombajj witches. Here I was again happy with my Ivory tower. Even after Tom got a underworld dreams in play, there was no problem. I could just ignore it as I was gaining more life then I lost every turn and things got ugly when I also got out my disrupting scepter. Before long, I got to do this with my lifecounter for the first time: 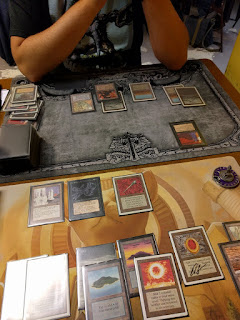 Neither my single mishra's factory nor my Tetravus showed up to finish it off though, so I ended up with this boardstate:

Fortunately, Tom did not mind me playing most of my deck. Oldschool players are awesome like that. Thanks Tom!
In game 2, balance was restored after he quickly played some creatures and factories and ran over me before I could get out a moat, balance or ivory tower. 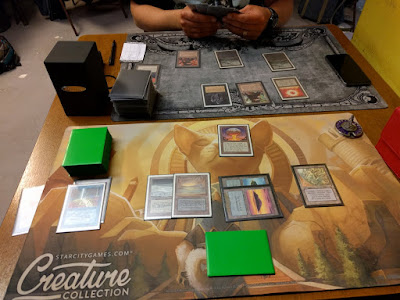 Game 3 was not starting well for me, with only 2 cities of brass early on after Tom destroyed one of my lands. I managed to get out an Abyss before balancing, and that stalled out the game for a while, so we ended up 1-1. 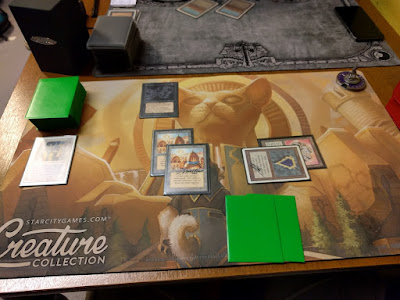 In Round 4 I played David, who was playing a ton of artifacts with the intention of killing you with a howling mine/underworld dreams combo. Needless to say, my Ivory Towers were the cards of the game.
There was however, the problem of actually winning in this situation. I mean, I was not going to die from the underworld dreams, but winning was going to be a challenge: 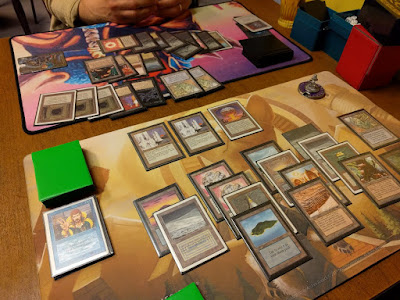 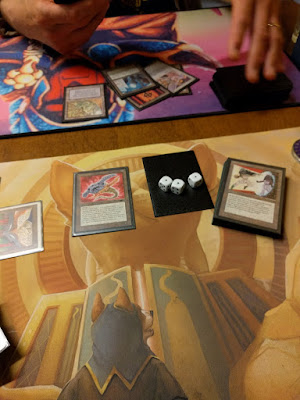 Eventually, I was able to pull of the win because of Tetravus' special ability to make more creatures, which allowed my to bypass the multiple copies of maze of ith on the table. It's always nice when you can pull something of just because of a particular card in your deck that does something that no other card in the format does. I ended up winning the match because of this.

On to match 5, which paired me against Evert, who has plenty of top 8 finishes and wins under his belt, so that was going to be a tough one. It was a hard match with lots of twists. Some of the key moments: 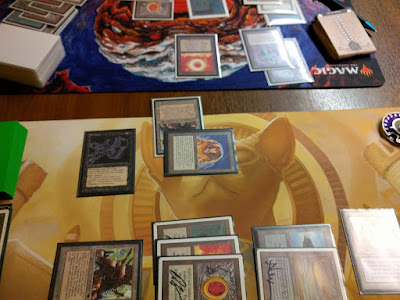 It was a game that took a long time and ended up in a 1-1. But damn, I knew ankhs and vises are good (i've played them both in a mono red atog deck for over a couple of years now, you can see a match of it played on Timmy Talks) but this was a really, really hard game which Evert probably would have won if we had more time.

So with three wins and two draws I was able to squeeze into the top 8, not bad for an pretty un-tuned deck with coffin/tetravus for a win condition.

I was paired against Nick in the top 8, who was playing a serious version of the deck and is also an excellent player. To top that off,  he opened with Library of Alexandria and countered my trying to get ahead with a time walk with a main deck red elemental blast. This was obviously not good. There is no way you can beat the deck when it's drawing more cards than you are, and this was starting off with that right from turn one. To see more of this match, watch this video on link: Timmy talks. The video is titled the deck vs the deck, but as you can see, my deck is not really the deck. Timmy was kind enough to point that out at the top of the comments section. Thanks Tim! Hope this deck inspires some to do some home brewing!

Some more impressions of the rest of the tournament: 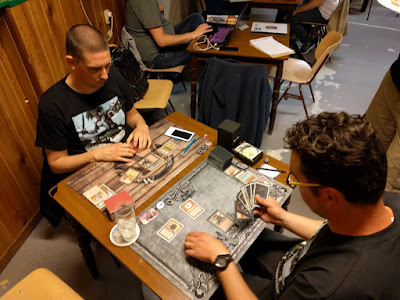 Thanks to the organizers and players for a great day. Till next time!