The insane KOT side event

The side event for Knights of Thorn would be something different, an oldschool-no-core-set event. This meant you could play only cards from AN, AQ, LE, DK. The upside would be all of your cards could be 4-offs, so you could compensate for the lack of staples.

Of course, this also calls for a lot of abuse, since you can play restriced cards from those sets 4 times. My first thought was: 4 libraries of Alexandria, cool :) (I don't actually own 4 libraries, but some of my friends who own libraries were not going, so I could borrow them). My first thought was a control deck but since that would make looking at grass grow more interesting for my opponents, I wanted a more active deck. I thought about red: 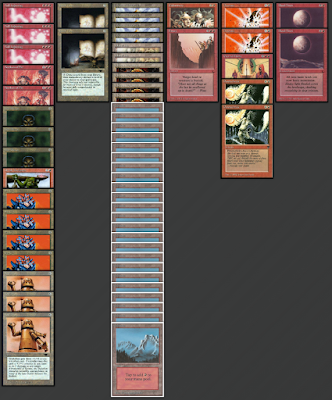 But I decided that though this would be a quick deck, it would also not make a lot of use the libraries. There are not a lot of cards to fill your hand with, as the only tome in the format does not let you actually gain more cards and I do not own a knowledge vault (which would have been quite sucky at best, with all the artifact destruction in this format), i decided to let red go and went for blue, since Sindbad can make you draw extra cards in case your hand becomes emptied for some reason. It would be kinda slow, but hey, why not. After some thought about wanting an active deck, I came up with this: 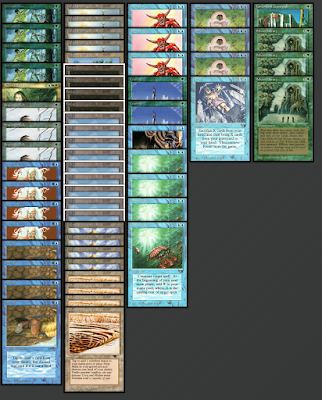 There are no artifacts in there to make artifact removal from my opponents useless. There is the killer combo of mana drain + amnesia and boomerangs to get rid of everything. Boomerang also works nicely with amnesia, as does hurkyls recall. You do want boomerangs especially for enchantments, since there are no other ways of getting rid of those in this format. Getting rid of abyss can be done with the concordant crossroads, but there is no other way of doing that. And I wanted to play with rubinia soulsinger, just because she's cool and think she does not see enough gameplay in oldschool.

So, while the finale of the main event was still going on, it was time for the side event.

These are the sort of hands you get while playing this deck: 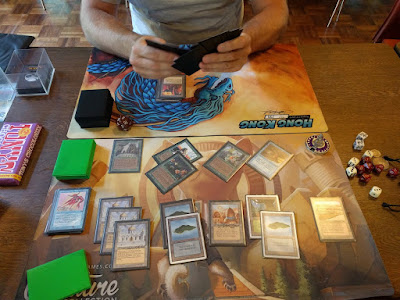 This went on for a couple of matches, and the deck was doing well. When this deck works, you literally draw more cards than you can handle. I started tapping libaries for mana to cast the djinns and efreets.

I had made some more pictures of the other two matches, but unfortunately, my phone (or my shaky hands at the end of the day) fucked those up, but you get the idea I think. And after the third match win, I had to play the finale. By then, my friend Peter really wanted to go home (it was getting quite late by then) and I was hoping to at least win so he would not have waited for nothing. The first game of the finale was going as expected, with the deck starting off at 1-0. Then disaster, karma or my awful shuffling skills kicked in, and I was stuck with two mana screws in a row, one because my early library was destroyed and I did not draw any other lands, not even with sindbad (which I just tapped every turn before or after my draw, depending on what I thought was statistically the most correct) so I ended up losing 1-2 in the finale. Too bad, I really thought I had a shot at winning this really nutty format. In the end, as always, my opponents were not taking this shit too seriously, we had a lot of nice chats and laughs. Should this format pop up somewhere, I think I have some ideas on how to improve the deck a bit, but I don't think it needs a lot of changes to do well.

Thanks to Mari for coming up with this insane idea for a side event, and thanks to all who played! And of course, thanks to Rene for lending me his two libraries of Alexandria.. I could not have done it without you. On to the next one :)