That Alpha to Alliances thing, you know, previously known as..

Second off: I know some people in de OS community have strong views and feelings about formats and cards. If you are one of those people, please know I don't mean to offend anything or anyone with what I'm writing here. It's just some thoughts about  my magic history, the A2A and the Ancient format. And some pictures, like I always do. At the end of the post, there are some inspirational pictures for people who are getting into Alpha 2 Alliances or Ancient.

When I stopped playing magic ages ago somewhere in the 1999-2000 era, I also had some strong feelings about Magic. I thought it had come way to competitive and way to unoriginal. I decided to quit in the middle of a national qualifier after I played 3 or 4 rounds against the same deck. I also had the feeling I had been playing the same guy several times, namely the guy that behaved like a dick and didn't say a word or smiled the whole match. Even though I had a good chance of qualifying, it just didn't do it for me anymore. I didn't have a good time like I used to. So I went to the judges' table and just dropped and went home. And I quit shortly after that. I tried to sell all of my cards twice, but twice the buyers that showed up just didn't have the cash they said they'd have. Being in a busy job I decided I didn't want any more timewasters, so I stuck my cards in a safe and left them there for 4 years, in which I did play the Vampire card game, played some Dark Age and a lot of tabletop RPG from the World of Darkness, but no Magic, with the exception of being dragged to a Vintage tournament once just because some of my friends were going . The strong feelings returned after some gave me a card with the new card frame. I think it was an enchantress, but I'm not really sure. I thought the new card frame was ugly. And after I was shown some more cards with the new frame, I also thought the artwork was pretty ugly and bland.

It was a trigger for me to open the safe and go through the cards that I used to love playing with. Seeing my playset of moxes was not what made me smile. It was cards like Erhnam Djinn, Juzam Djinn, Nether Void and Living plane that gave me a nostaligic and happy feeling. If only I could find some people that felt the same way. I found some guys that still had old stuff lying around and  I started playing again at our local game store. Pretty soon we had our first tournament with only old cards. It evolved into the Ancient format, in which we wanted to play like we used to. With all the pros and cons that were in play at the time, like the ridiculous banned and restricted list, but also stuff like mana burn. Because that's the way things were back then. I had a lot of fun organizing some events in Arnhem and Eindhoven for years, and I very much liked the creativity and laid back style of play. Even in tournaments, people were just there for the fun. Every now and then spikes shows up, and than they'd win. Or not, because old magic is a very unstable format in which anything can happen. 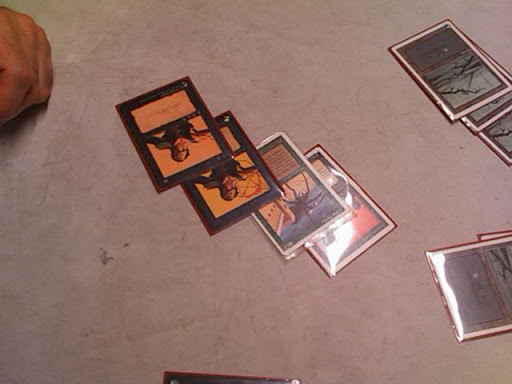 So when OS became a thing, I initially was sad that it seemed to push out Ancient, but it was just another reason to flop cardboard, and people did not seem to take very seriously. It was just play for the nostalgia and fun, and the love of old cardboard. So in my events, French OS (with mana burn) and Ancient took turns and were both played. Eventually, Swedish became the dominant OS format and people just wanted more of that and less and less people wanted to play Ancient. Which is fine, I suppose. I was a bit sad, but mostly just happy there were still reasons to meet people and play with the old cards and have fun.

So when Anne told me some people had stumbled upon my website somewhere in the summer of 2020, I didn't think much of it. He sent me some screenshots of the comments:

The main conclusion for some people however, was summed up in this set of comments: My thoughts at the time were mainly: I'll let Beth Moursund know what you think of her work :) But they're right, Magic rules were a bit messy for a long time. And you know what? That didn't stop me or anyone in the Ancient events from having a good time. We didn't give a damn if the ruleset was good or not. We understood the intentions of the rules and we just wanted to enjoy ourselves flopping old cardboard together, in the way it was done when we used to play it a lot. When that is your mindset, it does not matter whether or not rules have been chewed out until you need an actual lawyer to understand what the rules say. You just play, have fun and laugh together.

So, the comments didn't give me a lot of hopes for the idea of Ancient catching on. It seemed like people were put off by the rules, because god forbid Su-Chi or Mana drain becoming worse cards because of mana burn, or Mishra's factory becoming less good because it would do no damage if it tapped to make itself a 3/3. I don't see a problem there, by the way :)

But what struck me most is that these comments were made by people who find no objection in have a match being decided by whether or not there is a draft in the room when you flip your chaos orb. Or playing formats in which you can play 4 Mishra's workshops, which is much worse than playing 4 mana crypts, if you ask me.

My point being: guys, it doesn't matter. Don't get stressed out about rulesets en whether or not they're good, bad, messy or elitist. OS in any form is there to enjoy with likeminded people. So when I heard (again from Anne) that people had decided to play Ancient anyway, but give it a different name and some rulechanges, I was fine with it.

Play and enjoy the cards while playing A2A guys. I hope you have as much fun as we had when we played the same cards, and called it Ancient! You can even play the Ice Age basic lands for a change. I don't know about you, but I do like the artwork of those :)

For your inspiration, some pictures from different tournaments to get you started, enjoy! 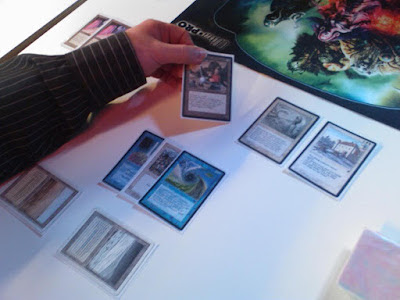 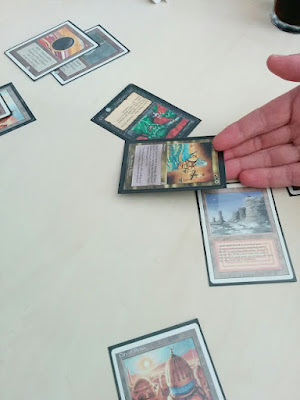 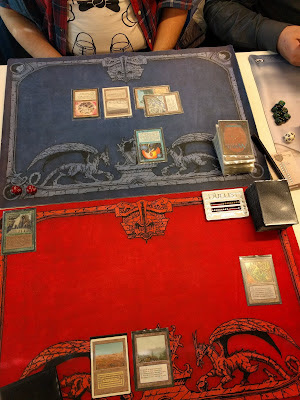 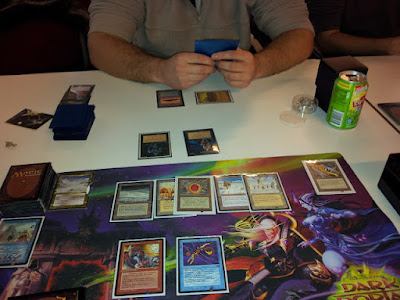 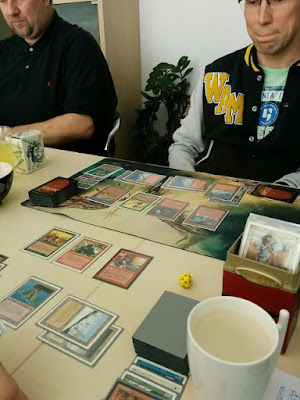 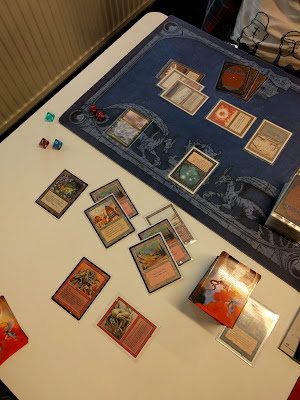 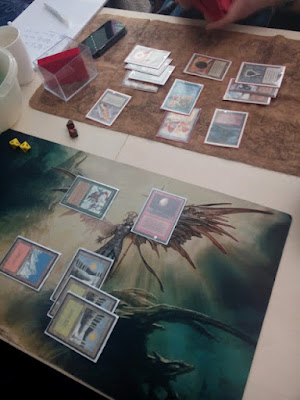 Now start deckbuilding! Grab your Orgg or Stormbind and enjoy!!